This event is pending land use permission. At this time, participation is limited to the first 50 registrants. If conditions allow, we will raise the limit. Please check back closer to the event date for updates.

Event #2/3 in the Ultimate Orienteer Series!

Head east for our only doubleheader of the season! In this edition, we start with a Middle Distance event at Jack Creek, then move to the Teanaway Forks for an Ultralong!

Course distances will be provided here once the courses are finalized.

What is my age class?

If you want to earn Ultimate points, check the table below to see which category you should sign up for. Find your age class in the left column, then follow the row across to the right until you find the dark orange cell. That is your “assigned” category.

For example, if you’re a female 16 or under, your Ultimate age class is F-16 and, for this event, is assigned to the Intermediate course. If you are up for a more challenging course, you can also earn points in F-18 on the Short Advanced course, or F-21+ on the Medium Advanced course. Just keep in mind that other courses are more difficult, both navigationally and physically.  Also keep in mind that you’ll be earning points only in the class you sign up for. How are courses measured?

Courses are measured as the crow flies, in a direct line from control to control. Unless you have wings, you will travel farther than this distance! Courses are measured in kilometers, so a good rule of thumb is to simply round up to miles to estimate how far you will go. So in a 5 kilometer race, you’ll likely travel up to 5 miles.

Check back later for special notes from the Course Designer(s).

*If you think you might take a long time on the course, start early in the start window. Also, wear a watch to ensure that you return to the finish by course closure time, even if you have to abandon your course to do so. Those returning after course closure will be disqualified and will make the volunteer staff very grumpy.

An e-punch records your race. At each control, you’ll dip the e-punch into an electronic box, which will beep and flash as confirmation. After you finish, you’ll download the e-punch at the download tent and get a receipt that show which controls you visited and how long you took between each; these are your “splits.”

Part of the fun of orienteering is comparing your splits with people who completed the same course, and discussing the routes you took!

Day-of-event registration is available by cash or check, made payable to Cascade Orienteering Club

Volunteers make these events happen! You can volunteer and participate on the same day, plus earn volunteer points to earn a free meet.

Parking will be at Twenty-nine Pines Campground on North Fork Teanaway Road.

This venue is part of the Teanaway Community Forest and you will need a Discover Pass to park. You can purchase a Discover Pass (annual or one-day) online or in person at many hunting/fishing license vendors or at several retail locations. Check the Discover Pass website for details.

Looking for a carpool? Join the Yahoo listserv and share your request to find a ride. 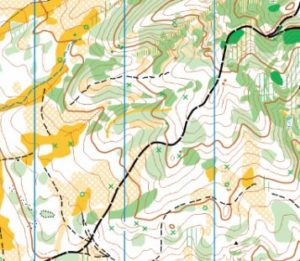 Jack Creek North is a new although small area. It covers a hillside that is rather flat and open near the campground at its western edge, and a lot of interesting landforms elsewhere. The lower part of the landscape is mostly open forest and wide open areas; elsewhere it ranges between open forest on spurs to dense vegetation in narrow valleys. You may encounter a few trails and a single forest road. It uses the ISOM 2017 symbol set with 1:10,000 scale and 5-meter contours.

Special Symbols: Green X is used most often for rootstocks, but also for stumps and logging debris piles. Green O is used for distinct trees.

Terrain and Vegetation: The map has fast and open meadows mixed with some open forest on a terrace near the main road, steeper slopes with some open runnable forest, and some less runnable terrain.

Jungle Creek is contains a large number of dense brush, rootstocks, stumps, and fallen logs that have burned away in places. The terrain offers a lot of different landforms, from large open hilltops to partly overgrown depressions. The vegetation ranges between open forest to dense (dark green) brush, the latter is often in wetter areas but not exclusively so. The scale is 10,000 and the contours 5 meters.

Special Symbols: Green X is used for rootstocks or logging debris piles. Green O is used for a distinct tree or large stump/snag. A green filled circle is a small bush. A Ride symbol is used for various older roads that are sometimes overgrown and sometimes hard to follow.

Ugly undergrowth (salal or similar vegetation) sometimes hinders passage. When it is nearly impossible to cross, the darkest green color is used. Undergrowth symbols are used when salal is close, or when you need to run around salal. Usually navigating around is possible.

Read more on the map page

Return to the Finish
All participants MUST return to the finish and download their e-punch or turn in their punch card.

Even if you have not finished your course, you must still return to the the finish and confirm with event staff that you have returned safely.

Out of Bounds
Some areas may be marked out of bounds. It is imperative to respect these boundaries to maintain our relationships with land managers. Participants MUST NOT go out of bounds. Any participant caught going out of bounds will be disqualified.

If you need a long time on the course, start as early in the start window as possible, wear a watch, and be prepared to cut your course short to make it back by the course closure time.

Whistle
All participants MUST carry a whistle on the course. Complimentary whistles are available at the start tent (please only take one).

If you are injured on the course and need assistance, blow three long blasts to call for help.

If you hear a call for help, abandon your course to find the person in distress.

Voices
Part of the fun and fairness of orienteering is navigating your own course, so please be polite when you find a checkpoint and don’t holler that you’ve found it.

Learn more about what to expect at an event.

Most events use e-punch for race timing. You can rent an e-punch for $5, or buy your own.

Don't have a compass? That's okay, you can borrow a baseplate compass for free at Cascade events, or even participate without one.

Membership is not required to participate in Cascade events, but you'll get a $5 per-meet discount if you do!

Cascade events rely on volunteers to happen. Learn what kind of volunteer positions are needed at events, and how you can earn volunteer points to orienteer for free!

Want to improve your orienteering? Read about skills you can apply at the next event.

Have more questions? We have more answers!

From announcements to skills articles, you'll find it all on the News page!

Tune into the club, and message members over the listserv. A great place to find a carpool!

Keep up-to-date on local navigation news by subscribing to the monthly newsletter.